Over The 56th Parallel. 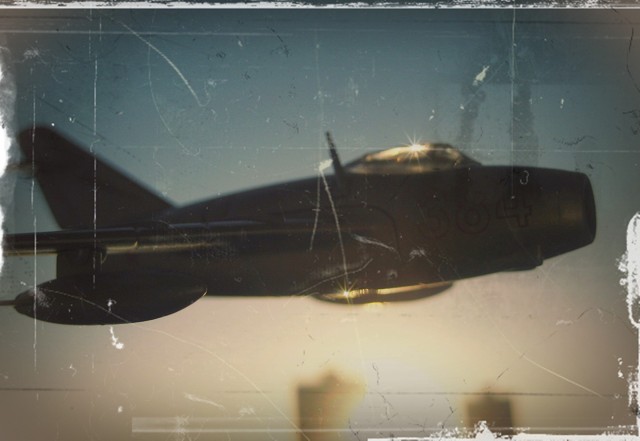 The design of the MiG-15, developed by Artem Mikoyan and Mikhail Gurevich and like the contemporaneous American F-86 Sabre, seems to have benefitted from German wartime research into jet-powered aircraft. The engines used were back-engineered from Rolls Royce Nene turbojets, as the Russian designs of the time were limited, the specifications of which and subsequent license to build were bought by the Soviet Union from Great Britain – when permission was sought to approach the Labour Government Stalin was said to replied: “What fool will sell us his secrets?”
The first prototype flew on 30th December 1947 and this design saw action in the first jet-versus-jet aerial battles in the Korean War, besting the both the straight-winged Lockheed Shooting Star and the Gloster Meteor with its advanced swept-wing design. Both Red Chinese and Soviet pilots saw action in this theatre against Allied forces, although the USSR never publicly acknowledged its participation. It was in a later training variant that cosmonaut Yuri Gagarin lost his life during a routine training mission in March 1968.